Finally finished, why does it take so long?

Maybe because the stanchions all have to be repaired as well and the planks below usually have to have some work done. Then there is the showers stopping work and everything having to be covered etc….

Anyway have finished starboard aft repairs and had a go at a bad patch near the bow.

John got fed up of me pussy footing around and attacked deck with a big chisel.

That’s a piece of new oak epoxied on to end of a covering board.

Worst bit had been repaired with expanding foam!

Was all very fiddly, but deck leaks stopped in the area.

Also worth noting, apart the from the first frost is all the spars have been sanded and treated by Tash, Pete and Jes.

The last act of the year has meant a much clearer starboard deck. Notice what’s gone?

That’s right, no main mast. It had been sitting on deck since October ’18 when it was taken down due to rot at the top and the state of the top mast.

We spent a few days jacking it up with a small bottle Jack and dragging it forward with a car winch attached to mooring bollard and hoisting with pulleys attached to mizzen. First onto the stanchion rail, then onto harbour wall and then finally into the water. Tim then towed it across the harbour to the Underfall yard. All very exciting. They have dragged it out into their workshop and it is now drying out on trestles. So at some point they are going to scarf a new top section. The top five foot was pretty bad but the repair will involve chamfering down another ten foot or so. I decided it was just too critical for me to fix it fit for sailing 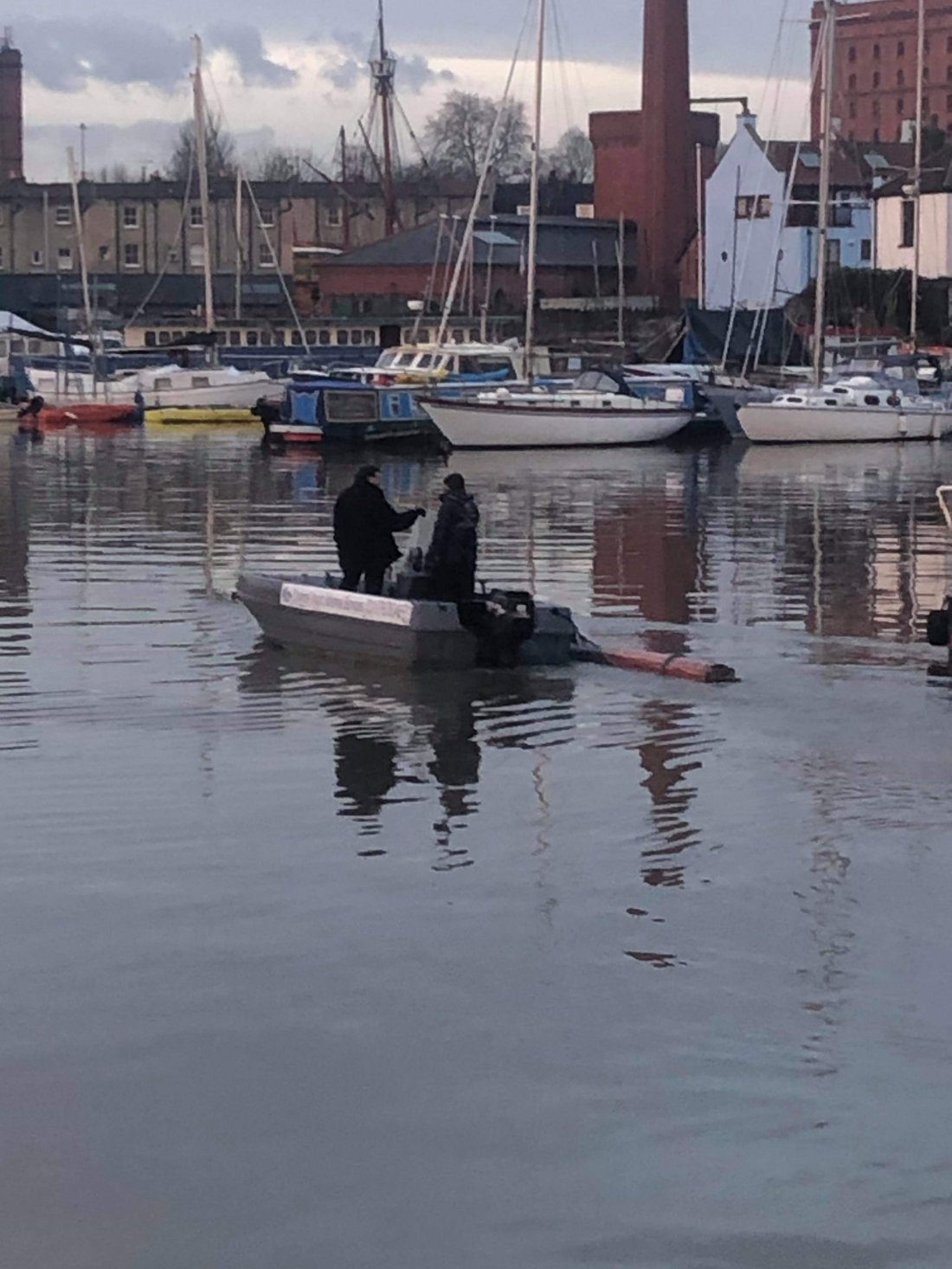 Thar she blows! That’s 40 foot of mast enroute to shipwrights.

Happy New Year to everyone and special thanks to everyone who helped out, donated or encouraged the project.

The new helpers have been removing those nasty rotten stanchion boards. Say hi to Egan and Libby. 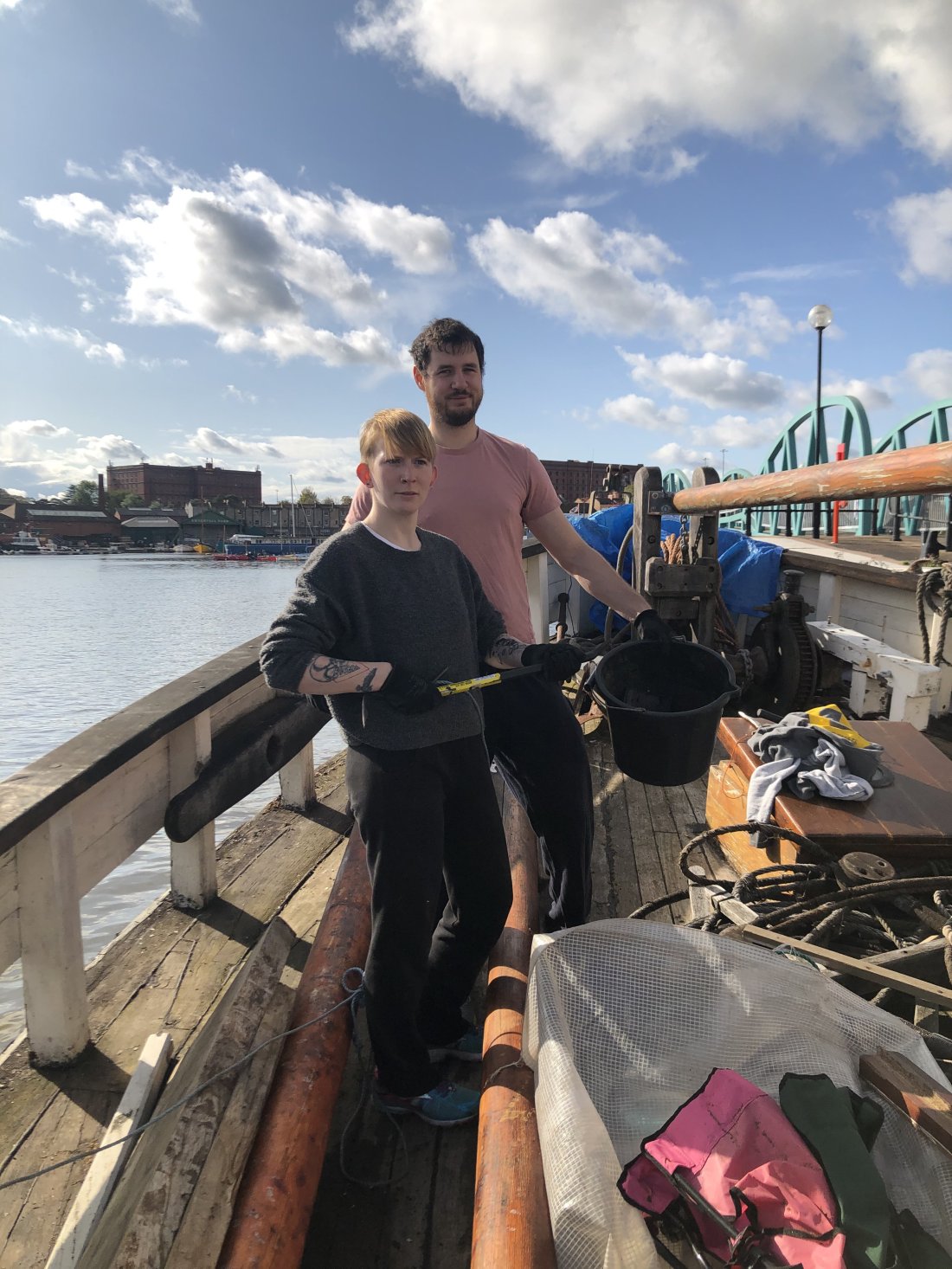 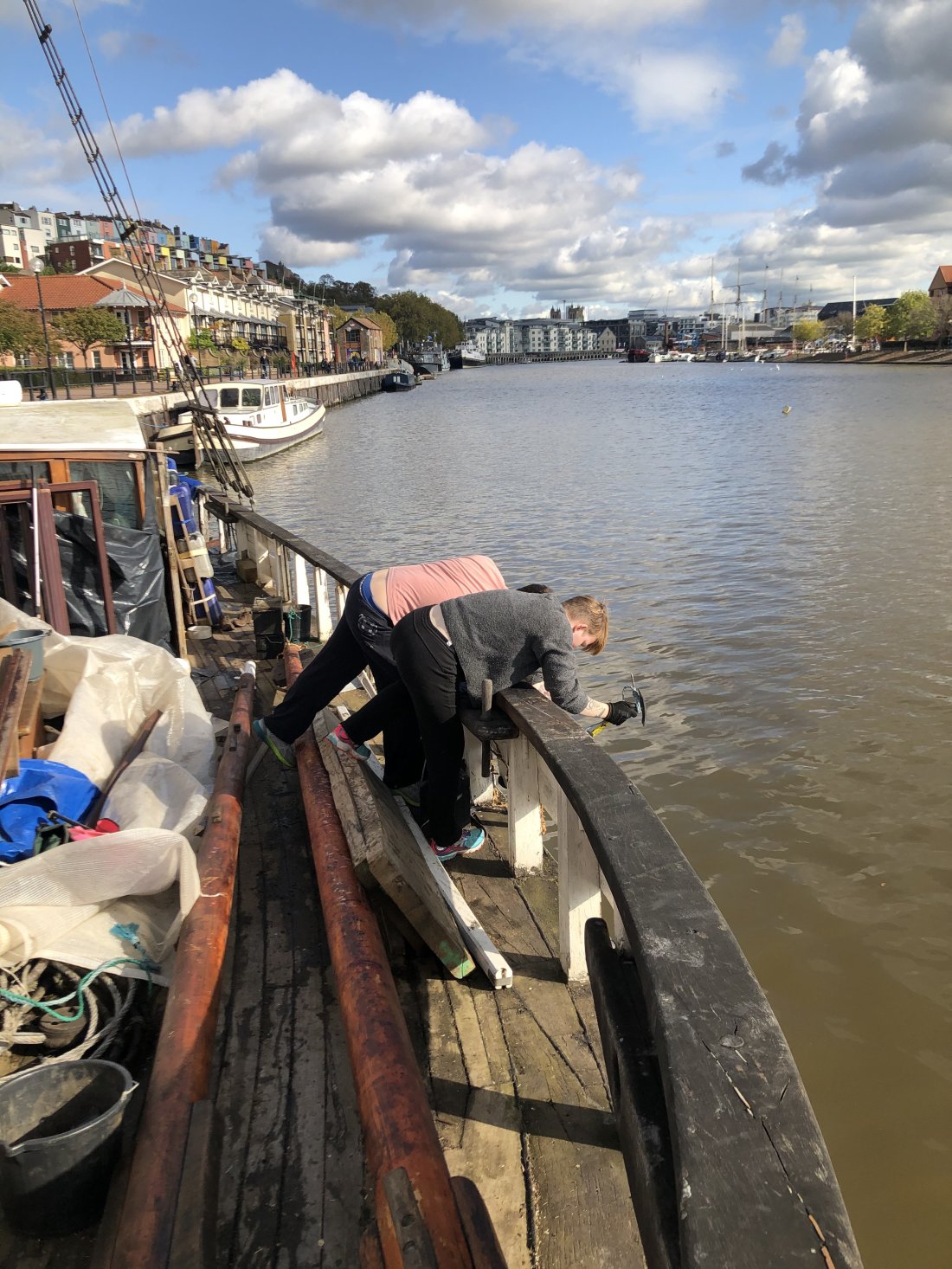 Most boards now gone and neither tools or volunteers have gone in the drink. 😉

The covering board work continues, have removed another and got the last one all snug and sealed. 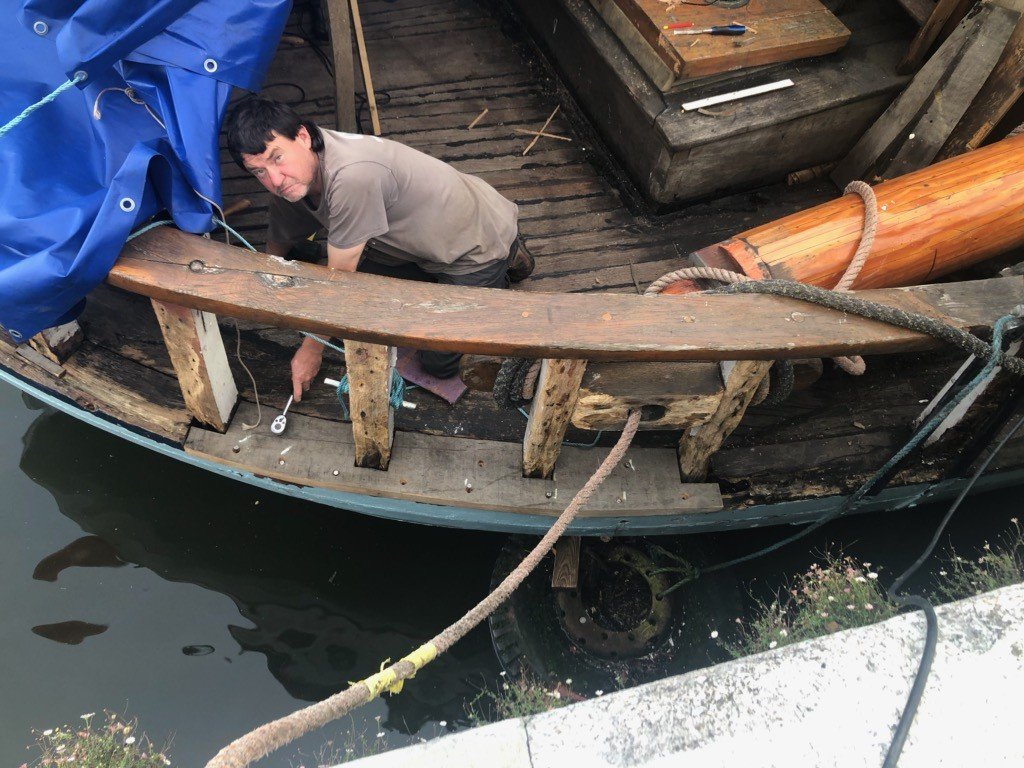 We have got yet more in board growths. 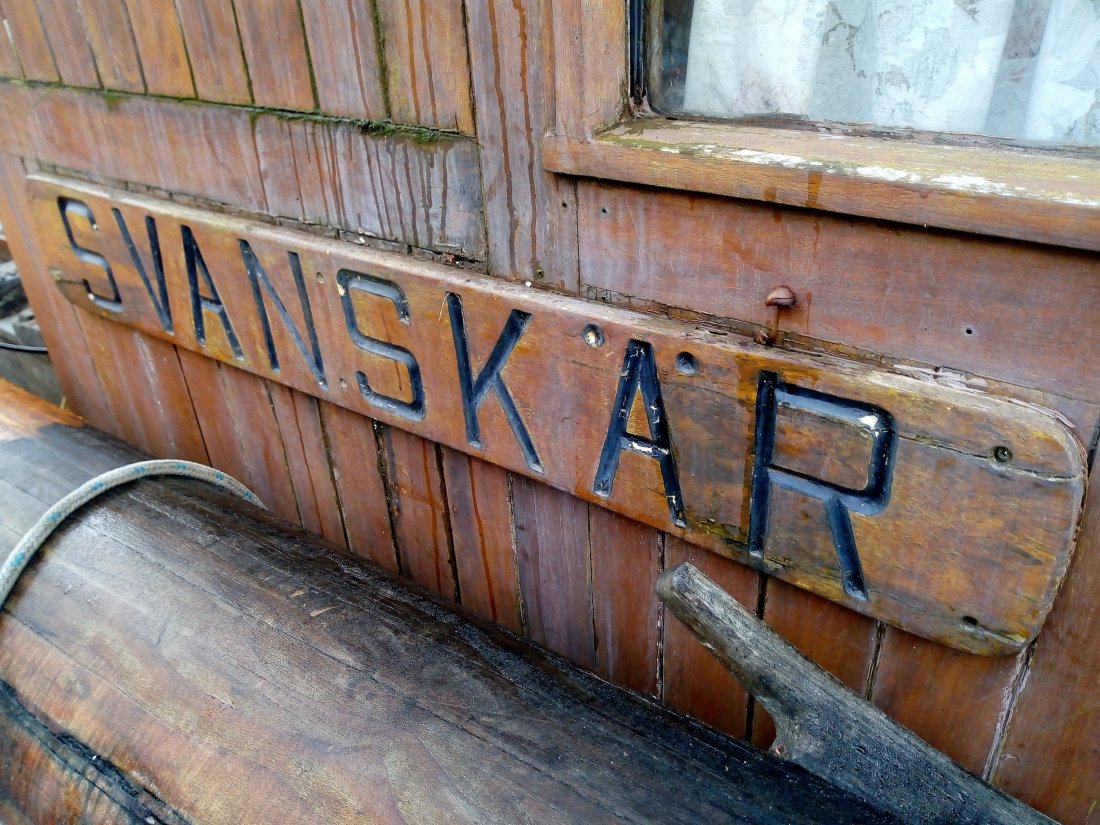 Svanskar is such a home to fungi.

With avengance it seems.:-/There is some evidence that keeping the decks wet does reduce leaks…..to a point. At least the ones I’ve worked on that appeared to have failed after extreme dry. They had opened up with visible gaps in the summer. I thought I was going to have to re seam all those I did last winter on the port cabin side deck. First rain it poured in but after a long wet period they stopped leaking. So still learning. However leaks up front that I haven’t been near still continue to drip.Continued observance brings us to the conclusion that the leaks on covering boards more important for now. So more of repair/replace those but this involves lots of work on stanchions.

with this one I am trying to save as much of the oroginal by gluing in patches. Also filling with epoxy. The grove here on outside is result of the old stanchion covering boards rotting away the oak. In process of getting rid of all covering boards obviously.

On the right of this can be seen first attempt at patching stanchion with oak and epoxying in. I should add a picture once it is resealed.

Evidence of the rain we have been having.

Tash has sanded and treated the hatches. Looking good.

A distraction was a boarding by 3 youths on a Sunday evening. As a result have fitted security light. Note how good mizzen looks!!!

Having been having lots of helpers, must take photos…..

Further work on the the port aft deck. Hope the deck planks mostly waterproof now but not really tested it properly waiting for rain. Several of the outside covering boards in a bad way so taking those out. 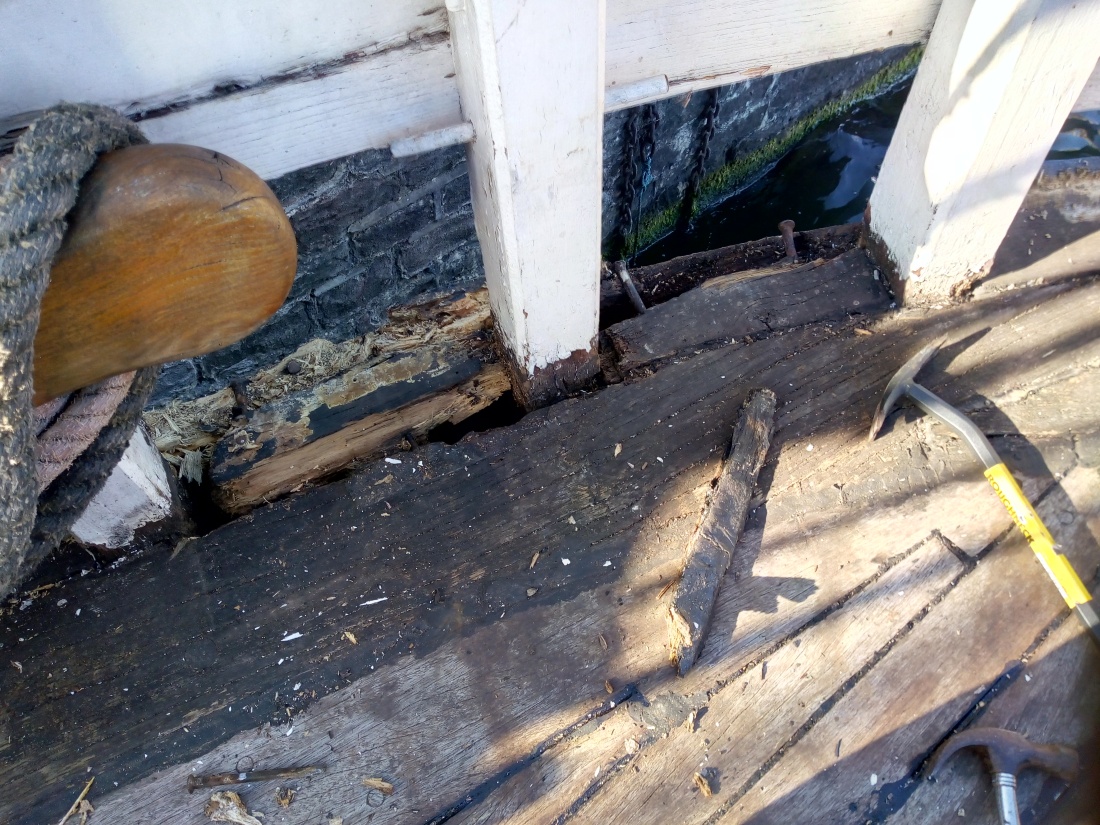 Had to remove cause of rot, softwood stanchion planks butting up against oak decking boards. 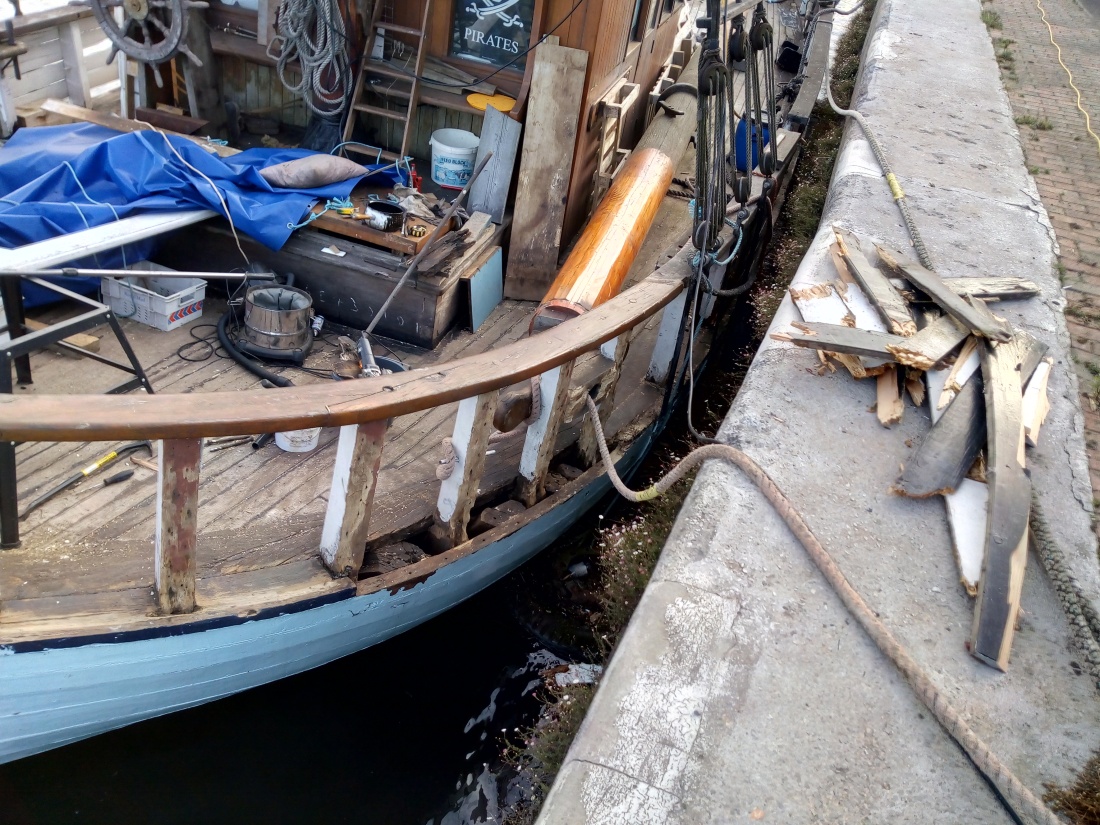 Seen here on wall having been removed.

The outside boards fixed to inside with massive pin seen here. No point, no thread, they must just be hammered into a pre drilled hole. I managed to get one out(hurrah) buy had to cut the others off(boo).

Anyway the frames on this side are in a much better state than the starboard side so I will be able to fit new covering boards without having to worry about covering rotten frames.

It is now nearly 4 months since Svanskar was out on the slip and the leaks seem to be reducing still. It is 32 hours since I arrived back and the auto bilge hasn’t operated so that is less than half a litre/hour. Such a relief after the “bucket every 10 minutes” straight after relaunch. Phew

So an exciting crew project was building a raft. Much fun was had, and there was a great tying of knots and splashing of water. 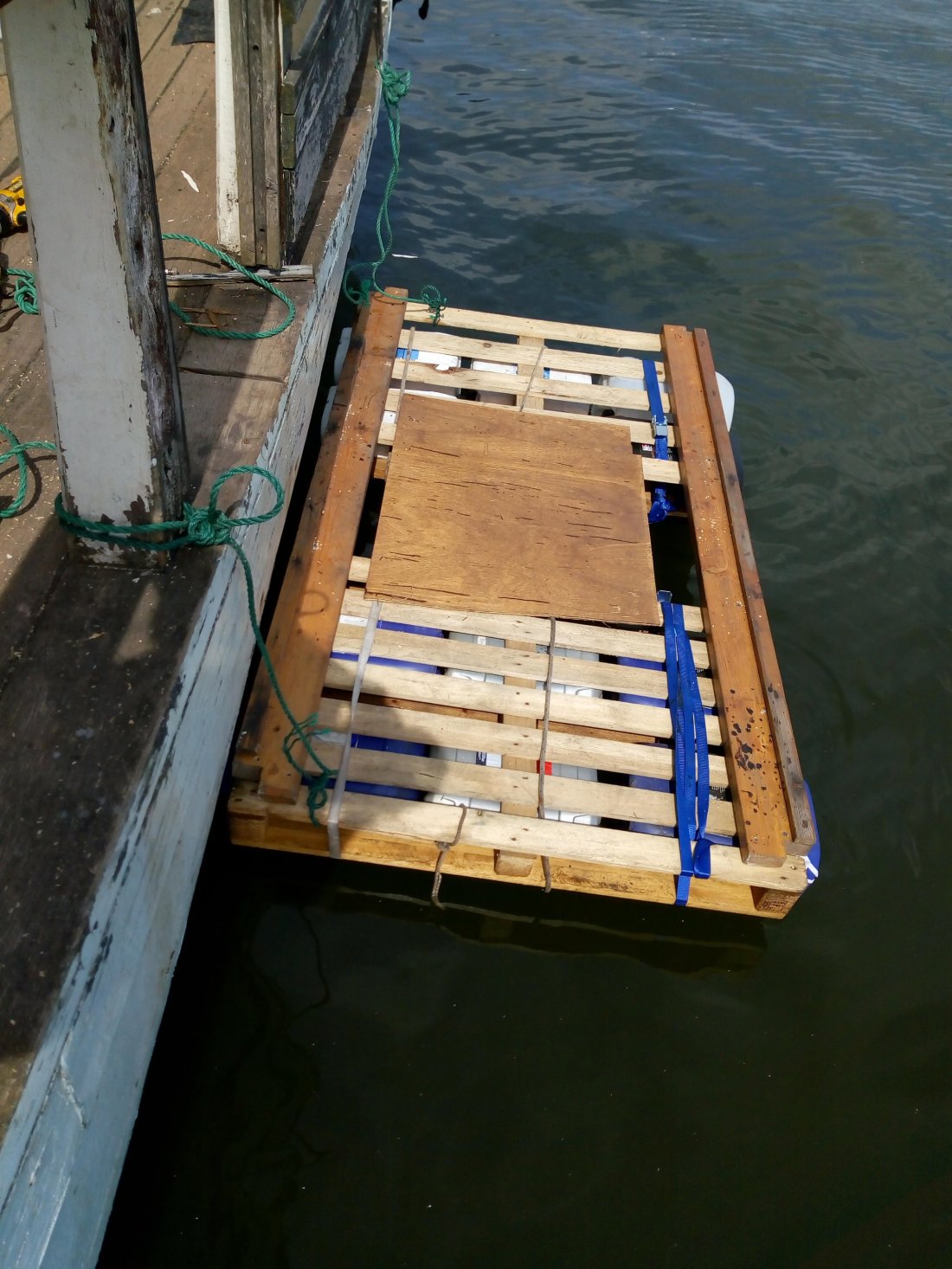 So a combination of rescued oil drums and Palets gave forth to the official Svanskar tender or maintenance pontoon. Well done Sam and Rowan.

So this has given the Cap’n no more excuses to get down and remove the rotten stern plank.

Seen here as a slight depression four planks down. Up close it looked grim.

So setting forth on the newly built ‘vessel’ I was able to rapidly remove the offending timber.

Shock horror. Looks like the plank is not oak!!!

Probably larch, much less dense than Oak and paler. Suspicious that this plank is only 6 years old………The good news is it’s only half the plank rotten. The bad news is that the plank above has quite a bit of rot in it as well. 😦

It’s been a while, mostly due to the time being occupied by doing seams on the rear deck(and redoing some 😦 )

Had hoped that it was pretty well done and we could survive with a dry bed during the last big rain. Er…. no. About a 20% failure rate and more old seams which had been dry till now suddenly deciding to fail.

So that means another load to do before being able to move on to for’ard deck. Have gone back to using pitch mostly, using polyurethane sealant on big gap around edge between the decking and the oak covering boards.

The leak that was so worrying when we went back in the water is now down to less than a litre an hour, quite a relief, she has indeed ‘taken up’ as all who know wooden boats reassured me(but only after she went back in!!!)

The horrible rusting metal support post in the middle of the boat got the old heave ho finally, replaced by a lovely post of Western Hemlock donated by David from his Shropshire forest home. 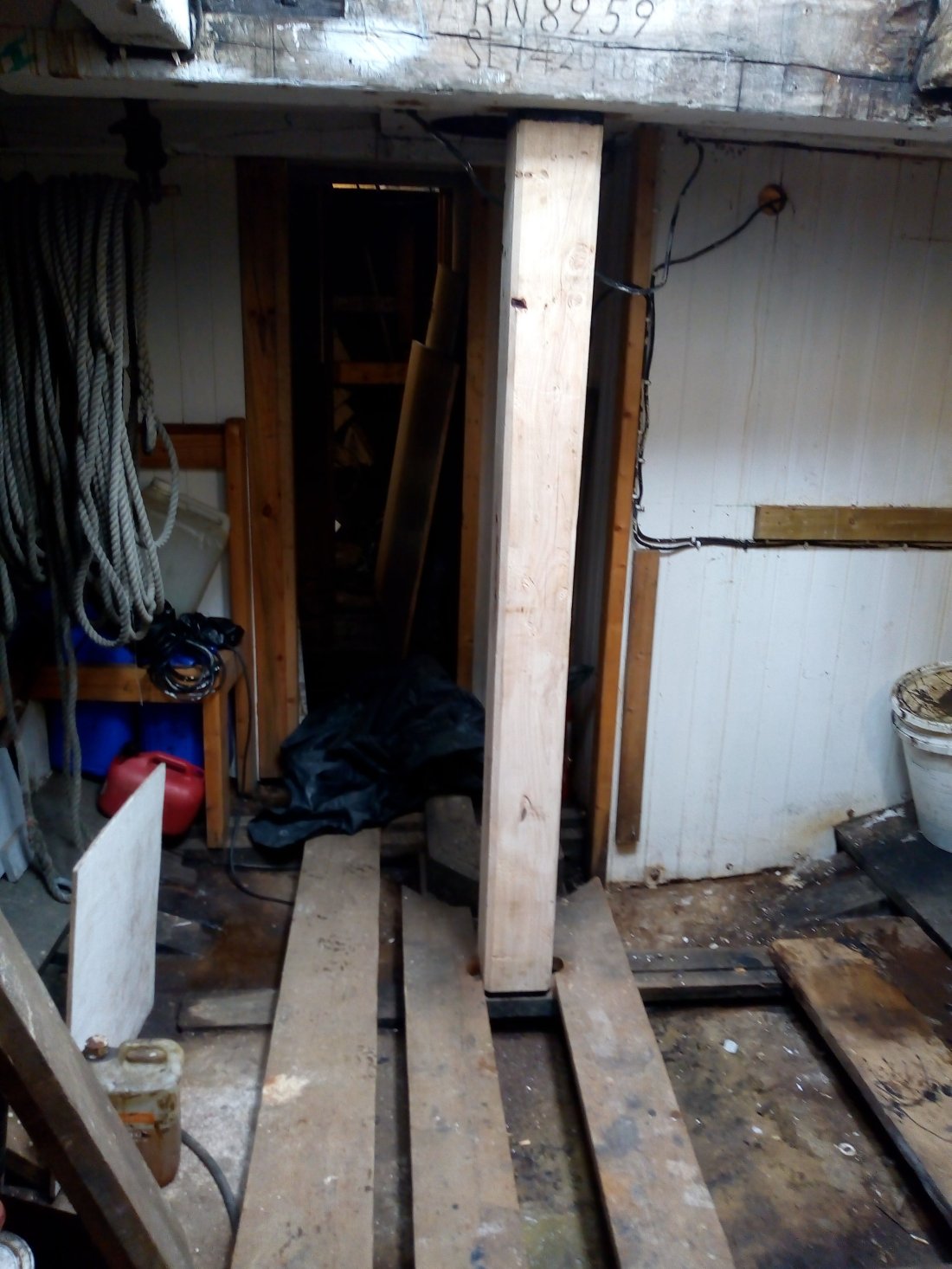 Tash decorated for the harbour festival, and Svanskar looked great despite being one mast down on last year.

So many people take photos of her! If they all donate we could soon afford to get the mast back up.

The overall impression of the project has been enhanced as well by Sam turning up with a fantastic display board.

Infinitely improving on my hastily cobbled together attempt. Thanks Sam.

Here’s the hole I repaired in various states. You can see the red lead putty in the seam to fill the seam and deter fresh water mussels which were munching everywhere, particularly the old putty and the metal!

And here’s the paint job she ended up with: 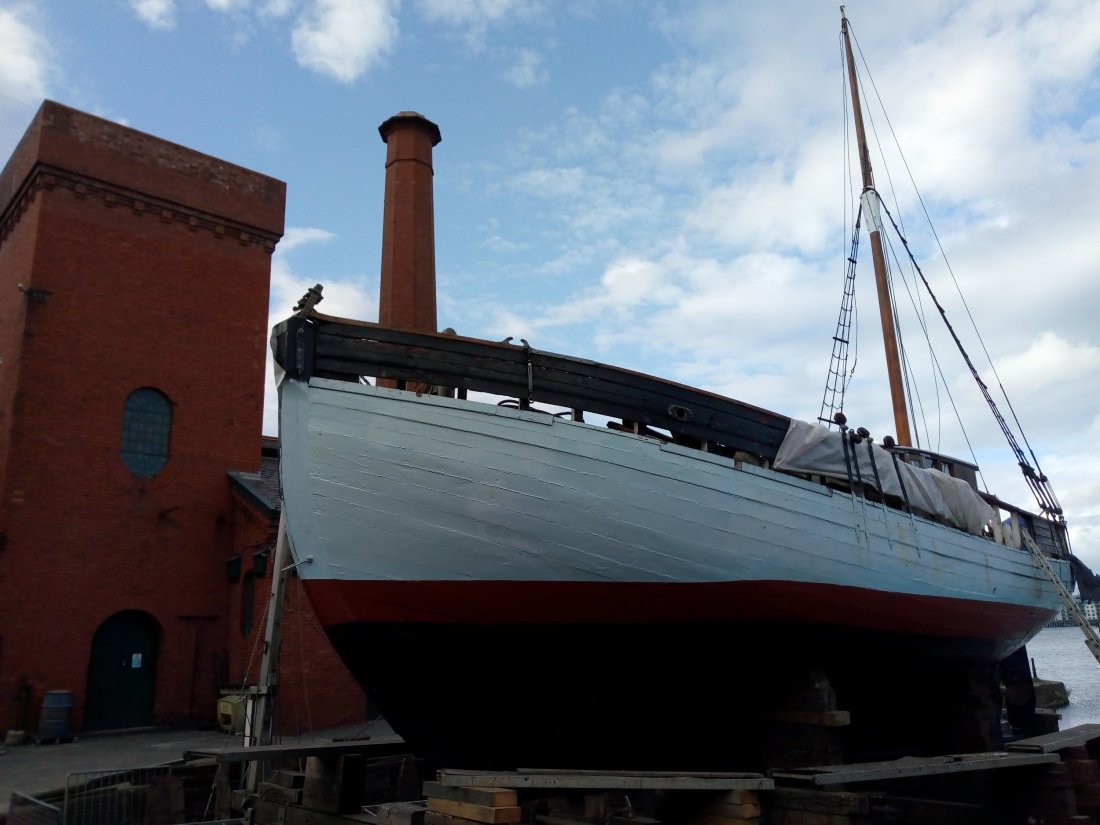 So ten days out of the water. Lots of paint slapped on, a big hole repaired and some seams re caulked etc and guess what? Quite leaky on return to water. She barely leaked before. So “she’ll take up”. Quite difficult to believe when a big bucketful(50 litres) coming in every 10 minutes. Okay it had been hot and dry and she was out for 11 days but!

So first night fun and games was had trying to get sawdust down under hull about a meter to try and fill some of leaks. The idea is the sawdust will get sucked into the boat and block the leak. By the time this was finished leaks down to a bucketful every 20 mins. Guess that’s halved.

Next day more of that but with much finer dust. 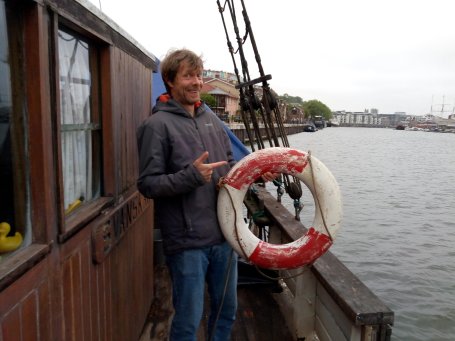 By the end of that day halved again down to a bucket every 50 minutes. Of course no idea if that would of happened anyway or if the dusting made any difference. But at least I was relaxing about it by know. By Friday it was down to a bucketful every hour and a half so going the right way. I’ll go back on Sunday to see how she’s doing!